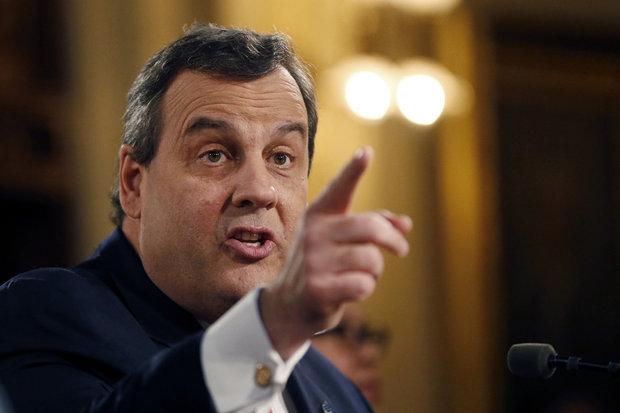 Speaking at the Louis Stokes Cleveland VA Medical Center, Christie said the president is working to ensure government agencies will have “ready access” to resources they will need to combat the epidemic once the national emergency is declared, MacDonald writes.

“The biggest problem would be if we did it in a way that was haphazard and less effective,” Christie said. “I’m confident, from talking to the president, that he’s awaiting the best advice that is very soon to come to him. I don’t doubt for a moment his resolve.”

Also at the VA event were commission member Patrick Kennedy, a former Democratic congressmen from Rhode Island; as well as Counselor to the President Kellyanne Conway and Secretary of Veterans Affairs David Shulkin.

No idea: Christie and Conway probably don’t get asked about Ohio ballot initiatives like Issue 2 that often.

But during the Thursday news conference on opioids, cleveland.com’s Mary Kilpatrick posed a question about the drug pricing issue.

The campaign for and against the statewide ballot issue is shaping up to be one of the most expensive in Ohio history, and Trump has been quite vocal about the high price of prescription drugs. Hence, our curiosity. Issue 2 would mandate that the price of drugs Ohio purchases for state employees, Medicaid recipients, prisoners and others be limited to what the Veterans Administration pays.

Does the Trump administration support the measure?

“I thankfully have absolutely no idea,” Christie said, as Conway stood silently, and another representative scolded the reporter for the off-topic question. “I have no idea, but I’m sure if you direct that question to the White House you’ll get an answer. ”

Bonus sighting: After the VA event, Christie, Conway and others were spotted hanging out at Yours Truly in Shaker Square, a popular place for politicos on the East Side. (Our spotter said Christie tried the pancakes and what looked like a vanilla shake. Not sure what everyone else had.)

Trump tax tour: “President Trump is planning a 13-state travel blitz over the next seven weeks to sell his tax reform plan to Americans,” Fox News reported. “The tour is expected to include several states that Trump won in 2016 and where Democratic senators are up for reelection next year, in an apparent attempt to seek bipartisan support on the plan.”

That includes Ohio — which Trump won by about eight points and where Democratic Sen. Sherrod Brown is up for reelection — as well as Florida, Indiana, Michigan and Pennsylvania, according to the Fox report.

In view of Trump’s tour, the U.S. Chamber of Commerce announced it is expanding a television and digital ad campaign about “pro-growth tax reform” in Ohio. The campaign will ask viewers to call Republican Reps. Jim Jordan, Mike Turner, Bill Johnson and Warren Davidson and encourage them to act, according to a news release from the chamber.

Welcome back: Former Cleveland Mayor Michael R. White made a rare appearance at City Hall Thursday as one of the recipients of the Cleveland Heritage Medal. White, who retired from politics in 2002, was greeted warmly. He shared this anecdote with cleveland.com’s Jane Morice:

“In all honesty, I was a little nervous,” White said. “But on my walk here, I got right to City Hall, and there was a gardener who was tending to the flowers out front. And he said, ‘Welcome back.’ And that meant a lot to me,” he said, choked up.

Tourism industry defends student visa program: The U.S. State Department’s Summer Work Travel program, which offers temporary employment to thousands of college students from dozens of foreign countries, may be in jeopardy, reports The Plain Dealer’s Susan Glaser. “And so, too, may some of the tourism businesses in Ohio that have come to rely on it to fill summer employee rosters,” Glaser writes. “The Trump administration is reviewing the program as part of its ‘Buy American and Hire American’ executive order issued last spring.” The Ohio Travel Association is encouraging business to let Washington know about their concerns.

You may remember Biggam from last year, when he turned down an offer to run the Republicans’ combined campaign in Ohio after Donald Trump secured the GOP nomination.

Portman navigating Trumpworld: BuzzFeed News’ Henry J. Gomez talked with Ohio U.S. Sen. Rob Portman about what it’s like for an old-fashioned, serious Midwest senator to deal “with this insane moment in politics” – namely, the Donald Trump presidency. Fun fact: Portman gets an alert on his phone every time Trump tweets. “And, just to be safe, Portman’s deputy communications director sends him an email each morning with Trump’s tweets, which more often than not jolt the day in different directions and into various diversions,” Gomez writes.

GOP gov candidates chime in on illegal voting indictments: Seven non-citizens were indicted on Thursday for voting illegally in Franklin County between 2012 and 2016, writes the Columbus Dispatch’s Jim Siegel.

Ohio Secretary of State Jon Husted and Attorney General Mike DeWine, whose office helped investigate the case, both issued statements about the case. Both are running for governor as Republicans in 2018.

“Today’s indictments are added proof that if you cheat in Ohio elections you will be caught and held accountable,” Husted said.

“I am proud that my office is able to play an integral role in preserving voting integrity in Ohio,” DeWine said.

You can weigh in on whether this is a good idea here.

“This was a tremendous victory for free speech,” Terry Gilbert, a lawyer for the men, said in a statement.

DeWine pens op-ed: Ohio Attorney General and Republican gubernatorial hopeful Mike DeWine wrote about his efforts to combat the opioid epidemic in an op-ed for The Hill published Wednesday. He noted that his office had sued opioid manufacturers and funded a program to help children affected by the crisis. Renacci, another GOP candidate for governor, also wrote a Hill op-ed on the issue the same day, as noted in this space on Thursday.

Eckhart, some may remember, challenged U.S. Sen. Rob Portman in last year’s Republican primary. He got 18 percent of the vote.