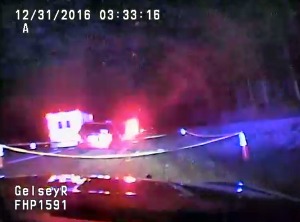 The patrol officer drove up behind the SUV that had pulled to the shoulder of I-4 in Central Florida, its hazard lights blinking, engine still running. He assumed the problem was a disabled vehicle, but then noticed the passenger door open, a figure apparently leaning against the side of the car. Then another figure, in the grass nearby, also motionless.

The figures were Daniel Kelsey, 32, and Heather Kelsey, 30, both dead from an overdose of fentanyl, a drug 50 times more potent than heroin.

The officer shined his flashlight into the back of the SUV. Looking up at him were the Kelseys’ three young sons, still buckled into their seats. The officer carried them out, these crying little boys who were now orphans.

Every day, every hour, the opioid epidemic is generating epic human disasters just like this one, with ripple effects that reach every part of our society. “I think you’d be hard pressed to find a family in America that is not somehow touched by this,” Sheriff Michael Chitwood of Volusia County, Florida, told Beth Kassab, who reported on the Kelsey tragedy for the Orlando Sentinel.

The rise of the opioid epidemic is why CleanSlate was formed, to treat patients suffering from the chronic disease of addiction with medicine and evidence-based care. We’re opening office-based, outpatient medication treatment centers as fast as we can to meet the overwhelming demand for our services across the country. But as if the stigma of addiction wasn’t making it difficult enough for patients to manage their disease, the added and frustrating stigma surrounding medication to treat addiction creates even more barriers to life-saving treatment, entrenching us further into this national crisis.

The costs of this epidemic start, of course, with the heartbreaking toll of human lives. Drug overdoses are now the top cause of accidental death in the United States, dwarfing gun violence and car crashes. In 2016, more than 63,000 people died from overdoses.

But there are far-reaching economic costs as well.

The Kelsey children are fortunate to have their deceased mom’s parents, who are now raising them. It’s a dramatic life change that the boys’ grandparents never expected or planned for.

Other kids don’t even have that privilege. A study by the University of Florida found that the opioid epidemic is annually costing state taxpayers $40 million for additional foster care needs.

There’s also the increased cost of hospital treatment in Florida tied to the epidemic, now at $1.1 billion each year. And these are only two of many line item costs for a single state.

When you look at all of the costs of the opioid crisis throughout the country, the impact is staggering. An analysis last November by health care research firm Altarum found that the cost of the opioid crisis in 2016 had risen to $95 billion, with the majority of costs calculated from losses in the workforce due to deaths from opioids. The total financial losses included strains on the criminal justice system and health care.

But a subsequent report from the White House Council of Economic Advisors tallied much higher numbers, putting the total economic burden of the opioid epidemic at $500 billion in a single year. Using a broader methodology to assess the financial damage of the crisis, the White House report included the lost lifetime earnings and contributions to society of affected families.

A preview of a study by AEI takes the estimated financial toll of the epidemic for the United States in aggregate and calculates how those costs are distributed across different states, assessing per capita numbers and state-by-state variations in opioid overdose deaths, opioid use disorders, health care costs, criminal justice costs, and worker productivity.  The study found that the District of Columbia bears the highest non-fatal per capita economic burden of this crisis ($352 per resident); the lowest costs are in South Dakota ($162 per resident). When you add in fatalities, West Virginia has the highest per-capita burden ($4,793 per resident) and Nebraska the lowest ($465 per resident). 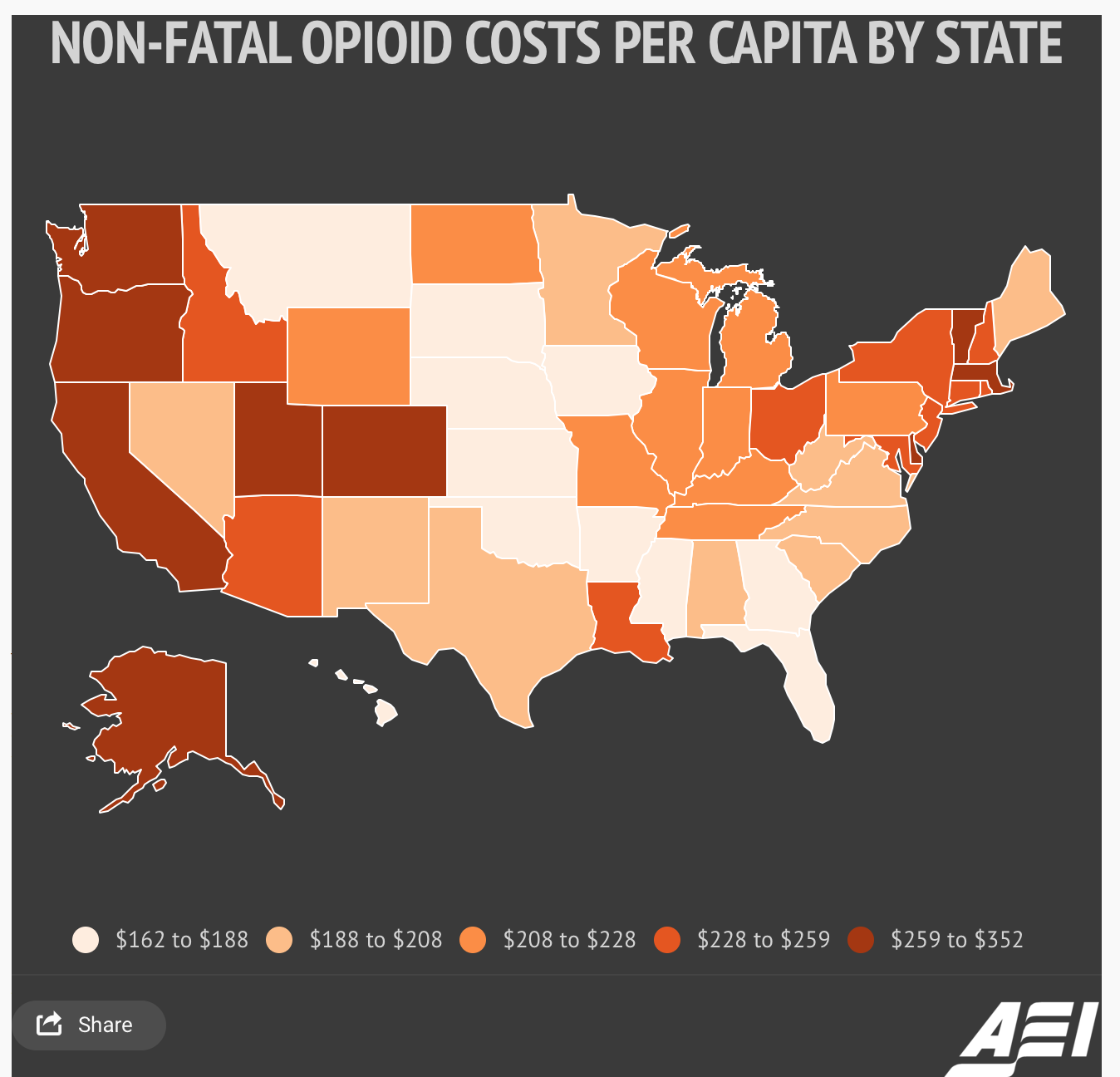 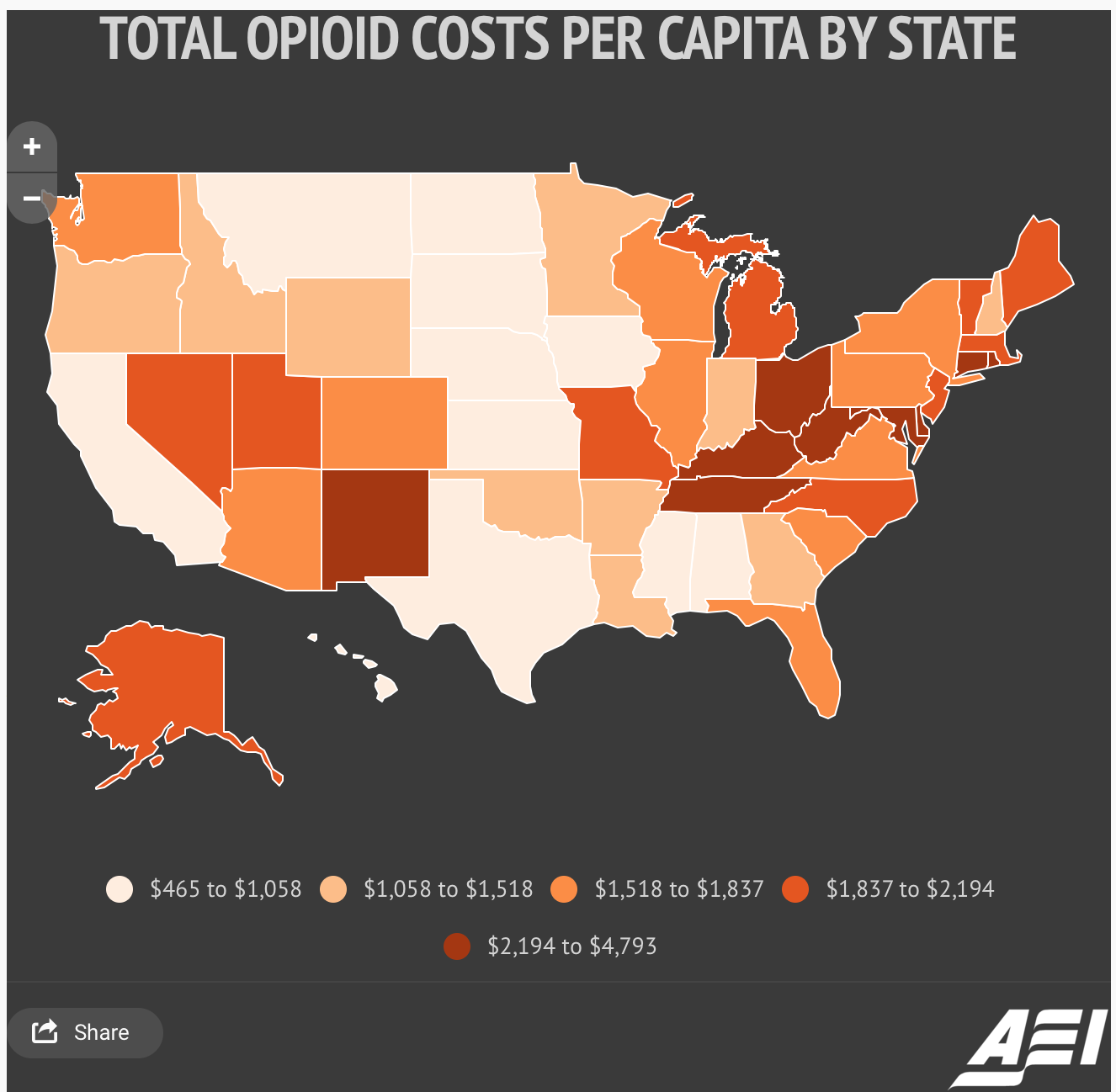 Given the massive costs that the United States is absorbing because of the epidemic – including the many markets that cannot find employees to fill open jobs because their local population is decimated by addiction – the question must be asked: are we spending enough money in the right places?

Not even close, say many experts. As reported in Money, Andrew Kessler, principal of Washington, D.C.-based consulting firm Slingshot Solution, says that trillions over the long term is what’s required to combat this chronic disease, with huge investments needed for treatment and recovery, as well as research and prevention. Sara Howe, CEO of Illinois Association for Behavioral Health, believes that we need more than $450 million a year for treatment and prevention—just in Illinois.

I’ve seen firsthand the bottom-line returns that come from investing in medication treatment for addiction. One of the insurance carriers that works with us at CleanSlate saw a 23% decrease in ER visits and 35% decrease in medical spending after contacted for their member’s care with CleanSlate.  The insurance company claims to have broken even the CleanSlate program in less than 10 months.

We also see evidence that patients take better care of themselves and stay safer when in treatment. Generally, about 25% of IV drug users will contract hepatitis C in 24 months. In a  cohort of IV drug users who came to CleanSlate, only 5% became hep C positive after the first 12 months. This trend could imply up to an 80% decrease in the chances an IV drug user will contract hep C if he or she begins treatment with medication. 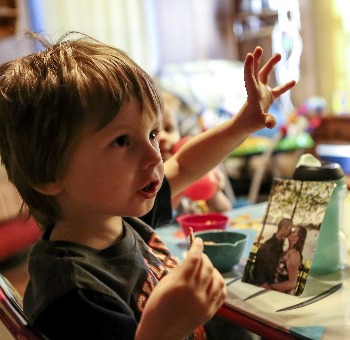 Joey Kelsey, with a photo of his deceased parents. Source: Orlando Sentinel

These results are encouraging developments that clearly demonstrate how evidenced-based treatments benefit not only individuals but also companies and society at large. When people receive treatment for their disease, they can pivot towards becoming full contributing members of their communities. Dependency on government and state programs can decrease, employment prospects increase, and the ripple effect continues from there.

We have seen this within our own patient population, many of whom have been able to reclaim their lives after beginning treatment. Patients give us inspiring feedback about how they have found jobs, moved into their own homes, gotten their kids back, and have hope for the future. Each of these success stories represent not just one life saved, but entire communities being restored, bit by bit.

Increasing investments in treatment for opioid addiction isn’t the only answer; we also need to make smarter investments. We need to rethink the flow of federal and state monies towards unproven healthcare network channels, many of which are based in old models of treatment methods that haven’t been proven effective by research and science; in fact, some have actually been proven to be harmful. And we need to stop focusing on outdated, bifurcated ROI models as the leading motivator for investment.

Instead, let’s encourage investments in approaches that have been proven to save lives. We need more public /private collaborations, increased access to evidence-based treatments, and a focus on reducing treatment costs by zeroing in on what works. We can invest wisely now or we can pay more later in treasure and human lives.

The cost savings should never be the leading motivator for organizations and individuals to invest in combating the opioid epidemic. But it’s one more reason why increasing access to treatment is not only the right thing to do for humanity, it’s also an important step to improving the economic prospects of our neighbors, communities, and country.

CleanSlate works closely with community partners to increase access, decrease stigma and provide the continuum of care that patients need. Stay in touch by signing up for weekly insights on addiction and the opioid epidemic through our newsletter at www.cleanslatecenters.com. Together we succeed.